We are pleased to announce that we now have available these five new products from Designs for Health. They are targeted at supporting the digestive and the immune systems. We are just starting to use them with clients and are already seeing great results. 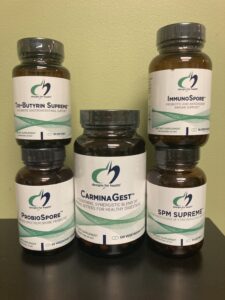 ImmunoSpore™  is a new immune support product that is an all-in-one preventive solution to those fearing infection from the most common current maladies we face today! It is a synergistic combination of spore-based probiotics and antioxidants to support natural immune system health and overall wellbeing. (It features 3 billion CFU spore-based probiotics (three industry-leading Bacillus strains), along with a highly concentrated chloroplast extract from organic spinach, vitamin C, zinc and the soluble fiber beta-glucan).

One capsule of ImmunoSpore™ contains:

Tri-Butyrin Supreme™ is the newest and best butyrate product on the market, which is a “postbiotic” having an immense retroactive regulatory effect on the entire immune system and GI Tract. Tri-Butyrin Supreme increases the production of antimicrobial compounds in intestinal macrophages in vivo and downregulates the inflammatory response. It drives differentiation of monocytes to macrophages. Butyrate is believed to play a role in decreasing risk for colon cancer via various mechanisms, such as inhibition of initial carcinogenesis, reducing oxidative stress, and anti-inflammatory effects in the gut. In this way Butyrate helps heal the gut lining.

SPM Supreme™ is a combination of three highly potent specialized pro-resolving mediators, delivered at 150mcg per softgel, which is, by far, the highest concentration available anywhere! In fact, there are only a handful of companies that sell SPMs and DFH sells it and half the cost of others.

Here’s what you can expect from SPM Supreme:

CarminaGest™ is a powerful digestive support formula containing herbal bitters designed to optimize healthy digestion and help reduce occasional gastrointestinal discomfort after meals, such as gas, bloating, and excessive fullness. This product is ideal for individuals who are sensitive to supplementation with hydrochloric acid (HCl, stomach acid) and for vegetarians and vegans who may benefit from digestive support but who prefer to avoid animal-sourced digestive enzymes. (Many digestive support products contain enzymes and bile of animal origin. CarminaGest™ is completely free of these ingredients and contains solely plant-based compounds.)

ProbioSpore™ is an industry-leading broad-spectrum therapeutic spore-based probiotic used to optimize gastrointestinal (GI) health. Spore-based strains such as Bacillus are vital to the food chain as they have the intrinsic ability to produce a multitude of enzymes, secretory proteins, antimicrobial compounds, vitamins, and carotenoids.

Spore-forming probiotics are soil-based microorganisms found in dirt and vegetation that possess the ability to surround themselves with durable coats of protein, allowing them to survive in hostile environmental conditions. Unlike most traditional probiotics which are similar to those naturally found in the human GI tract (e.g., lactobacilli, bifidobacteria), spore-based probiotics are delivered as dormant spores. The endospores encapsulate the beneficial bacteria strains making them extremely stable and highly resistant to stomach acid’s low pH, resulting in delivery of more usable probiotics to the small intestine where they then revert to active, growing bacteria.

About the Author: Bernard Rosen, PhD